University of Iowa research findings suggest that eroding streambanks may contribute at least one-third or more of phosphorus moving to the Mississippi River and Iowa lakes. 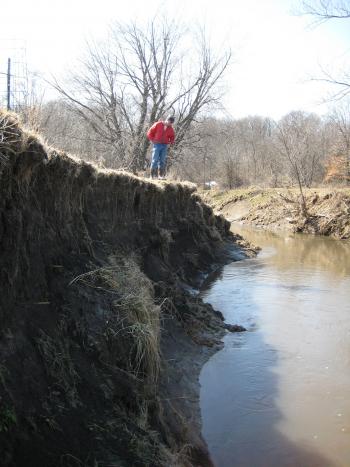 Erosion was known to be a potentially large source of phosphorus-carrying stream sediment when the university established the Iowa Nutrient Reduction Strategy science and technology-based framework in 2013. However, the higher priority at that time was reducing nutrient loss from watersheds -- lowering total nitrogen (N) and phosphorus (P) loads leaving the state by 45%.

Led by Keith Schilling, state geologist and Director of the Iowa Geological Survey at the University of Iowa, and Dr. Tom Isenhart, professor of Natural Resource Ecology and Management at Iowa State University, the new study has analyzed data collected from aerial LiDAR mapping and extensive field monitoring in 16 watersheds around the state.

It also has integrated computer modeling. The calculated average rate of erosion over an 18-year period from the years 2000 to 2017 was approximately 7,680 metric tons of total phosphorus per year.

Researchers deem the estimate conservative because smaller, first- and second-order headwater streams were excluded from the study due to satellite mapping limitations. While smaller streams comprise the majority of Iowa's stream networks, they tend to have less severe bank erosion. Nonetheless, streambank recession still occurs.

Matt Helmers, Director of the Iowa Nutrient Research Center commented on the implications for nonpoint source control, “The focus of implementation efforts so far has largely been on land-based conservation practices… (there’s a) need to give greater attention to integrated practices that address in-stream sources and reduce the volume and power of water leaving the landscape, which can ultimately stabilize streambanks and channels.”