Increasing public safety threat from tornadoes, heavy storms and floods reveals disparity in resources for meteorologists in the neighboring states of Kentucky and Tennessee.

Kentucky meteorologists rely on a mesonet, or mesoscale network, that automates the collection of weather and environmental data. Mesoscale specifically refers to a 20-mile radius around a monitoring site. However, Tennessee counterparts do not have a similarly robust ground-based monitoring network.

For the past 15 years, the Kentucky Climate Center at Western Kentucky University has been operating the commonwealth’s network of 76 local weather monitoring stations and providing an official source of climatological observations. It plans to add up to 20 more stations in the next three years.

“The weather service would be lost without the Kentucky Mesonet,” said John Gordon, meteorologist in charge of NOAA’s National Weather Service office in Louisville.

Collecting data from multiple, localized weather stations is strongly and widely recommended to help authorities identify risks and prevent damage and death. Thirty-five states have mesonets which provide valuable information not only to meteorologists, but also agriculture and other industries that contribute to local economies.

Tennessee has radar systems, but it doesn’t have a statewide weather monitoring network. Meteorologists say radar systems observe activity thousands of feet in the air -- missing a significant number of phenomena much closer to the ground. Once a tornado touches ground, a mesonet can report conditions likely to sustain it, stop it or elevate it.

In January, 2021 Andrew Joyner was named the state’s official climatologist. As head of the newly created Tennessee climate office, Joyner has a goal to build a 95-station Tennessee mesonet – so each county has a station.

“It’s not cheap to build these stations and then manage them,” he said. “But … there’s a critical need.”

The deliberate and equitable distribution of localized monitoring stations across a territory is arguably fundamental despite their cost. Mesonets are paid for with a variety of private or public funds. A single monitoring station can cost as much as $29,000, not including ongoing costs for operation and maintenance.

Joyner is collaborating with state emergency management, environment, agriculture and weather agencies to fund and site stations and eventually maintain them.

“Think of a mesonet … as statewide infrastructure for environmental monitoring,” said Stuart Foster, who retired in 2021 as state climatologist and Director of the Kentucky Mesonet, which was initially financed through a $3 million federal grant.

Last year the Kentucky Mesonet received $750,000 from the state’s General Assembly along with contributions from local sponsors and federal grants. 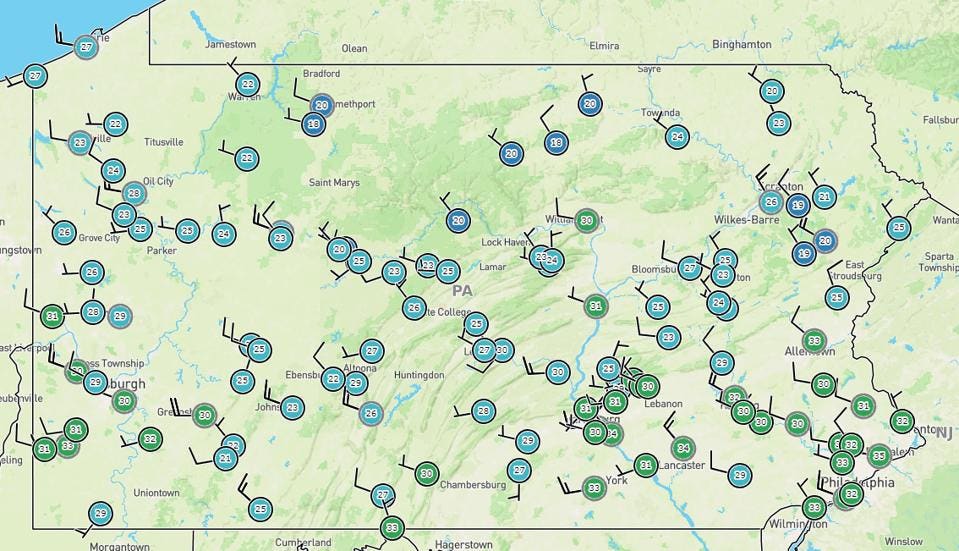 A typical mesonet transmits data every five minutes, given modern computer and communications technology. Temperature, relative humidity and wind speed are measured at different heights to reveal temperature inversions that can influence the dispersion of air pollution. The result is a much richer dataset of observations that help improve the accuracy of weather forecasts.

While the earliest beneficiaries of weather networks were farms, school superintendents and utilities have been consulting their information to determine snow days or planning improvements to energy grids, respectively.

Forbes.com reported that Pennsylvania launched the Keystone Mesonet (pictured, above) in 2020, a few years after New York launched its own statewide mesonet in 2018.