As another “unusually active” season has been forecasted as hurricane season starts June 1, the adoption of high-tech tools has enabled hurricane experts to markedly improve the forecast of hurricane paths, helping emergency managers to issue storm advisories or mandatory evacuation orders when hurricanes approach.

Hurricane forecasters can more easily see and interpret weather patterns on scales of hundreds to thousands of miles – for example, wind speeds and wind directions at different altitudes, which circle the eye of the storm and mostly influence a hurricane path.

New technology that has improved data collection from satellites and hurricane hunter aircraft in addition to computer models that can better assimilate all the data have resulted in more accurate observations of hurricanes. 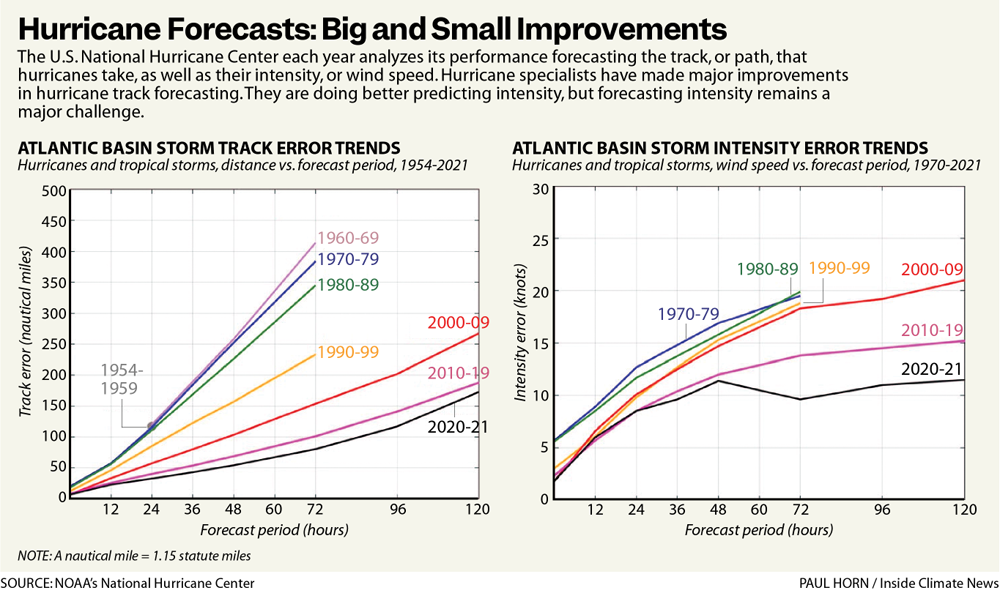 However, forecasting tropical storm intensity or predicting rapid intensification remains a big challenge… even though National Oceanic and Atmospheric Administration (NOAA) has reduced intensity forecast errors by 30% since 2010.

John Cangialosi, a senior hurricane specialist at NOAA, National Hurricane Center explained that “emergency managers may not have sufficient time to organize an effective evacuation when storms intensify so quickly before they make landfall.”

Scientists are turning to specialized drones to gathering more data in that critical interface and better forecast intensification. These devices must be capable of going “down a thousand feet into the water, and up into and around the storm.”

Deploying water and air-based drones to collect large volumes of environmental data – from under and across the surface of the water, and in the air – will help increase scientific understanding of hurricanes and improve forecasts without endangering lives.

“The challenge is in knowing how and when a particular storm will respond in a particular way to its environment, and some of that, as far as we know, is random,” noted John Nielsen-Gammon, the Texas state climatologist and a professor of atmospheric sciences at Texas A&M University. “…many storms in similar environments behave in different ways.”

Emergency managers are eager for more accurate intensity forecasts because evacuations are expensive, in terms of public trust. “When you cry wolf and nothing happens, people become desensitized to those forecasts,” said Craig Fugate, Director of Federal Emergency Management Agency (FEMA). The intensity forecast has great potential for people to not understand and then make bad decisions about evacuating.

In addition to forecast accuracy, officials must clearly communicate a hurricane’s risks. “A perfect forecast is not an outcome,” Fugate clearly stated, “The outcome is people heard it, understood it, acted appropriately, and we reduce the loss of life and the damage from that storm.”

On 24 June 2022 the NOAA predicted that the U.S. is likely to face its "seventh consecutive above-average" hurricane season, fueled by warm waters and continued La Niña conditions.